As I had previously mentioned in my Goals Update post, I had two major goals for this year, one that happened and one that didn’t. I had a good feeling coming into this year that it was going to be “my year”, and it didn’t completely work out that way but it was still a pretty amazing year.

The year started with a bang at the Stout Bout competition in February.  My “barrel” aged Rum Stout scored 36 points and took first place in Wood and Barrel Aged.  My first ever 1st place category win, although being a limited style competiton (Stouts Only) it didn’t qualify for Oregon State Homebrewer of the Year.  The same beer scored a 27 at KLCC, which shows some variability from comp to comp, as well as deeper competition since I wasn’t going against just stouts. 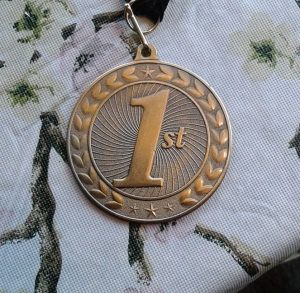 Next up was the COHO Spring Fling, I entered my Belgian Dark Strong, my CDA and a British Bitter, a style I had never brewed before.  The BDS and CDA didn’t score well (both around 25 points) but the Bitter scored a 40.5 and took 1st Place in British Beers.

COHO was a qualifier for OSHBOTY and so I accomplished my first goal of the year which was to get on the scoreboard.  I only got 5 points, but it was enough to get my name on there.

That’s also what I finished the year with.  One of the goals for next year will be to score points in more than one competition.

Next came the results of the National Homebrew Competition First Round, which was my second goal of the year, medal in a category and advance to finals.  Unfortunately, that didn’t happen, but I’m happy with my scores.  The CDA scored 34.5, the BDS scored 32.5 and the Bitter scored 29. Maybe next year.

In May was my homebrew club’s IPA specific competition Heart of Cascadia.  My CDA scored 40 points and took 1st place in the Black IPA/Cascadian Dark Ale category.  While also not a OSHBOTY qualifier, this was now my third award of the year, all three of which were first place and in three different categories.  Shocked doesn’t describe what I was feeling by this point. 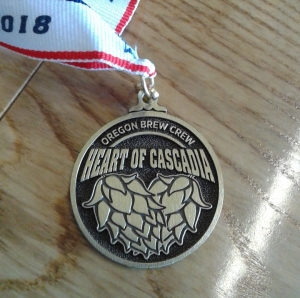 Rounding out the summer competitions was the Oregon State Fair.  I entered my CDA, Belgian Dark Strong and Bitter again, and the BDS took Third place in the Trappist Category.

In September and October there were three competitions fairly close together to round out the year.  At Rocktoberfest in Bend my CDA scored 30.3 and my BDS scored 36.5 but didn’t take home any medals.  The at Salem Harvest Classic, my only entry was my BDS.  The BDS scored 40.5 points and took first place Trappist and earned an Honorable Mention in the Best in Show judging.  Essentially, it ended up 4th place in BOS but needed some serious deliberation to split between 3rd and 4th.

The last competition of the year was my homebrew club’s big annual competition, the Fall Classic.  I entered my CDA, BDS and a rebrew of the Bitter (which didn’t go well).  The bitter scored a 26, which wasn’t shocking, the BDS scored a 31 and my CDA scored a 32 and took 3rd place in Specialty IPA, which is always a very competitive category. 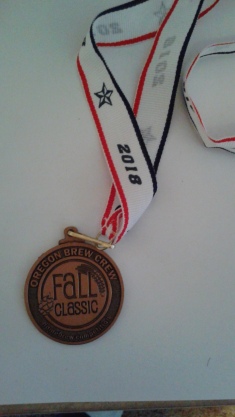 Overall, 6 awards is a drop from last years 8, however the spread of 4 golds and 2 bronze, slightly edges out last years 5 bronze and 3 silver.  Quality over quantity?

In the OBC Homebrewers Cup (Homebrewer of the Year) I earned 77 points, an increase from last year’s 51.  Gold medals are worth more.  In 2016 I earned 32 points, so a steady increase each year.  Still, not remotely close to winning Brewer of the Year (first place has 504 points) but I’m happy with the increase.

The goals for next year will remain similar to last year.  I achieved the goal of scoring points in OSHBOTY, so perhaps the goal now will be to beat my previous years total of 5 points.  I still don’t expect to win the thing or even finish top ten, but beating 5 points will mean winning more than one category or winning a large one, such as IPA.

The goal of medaling in NHC regionals and advancing to Finals will continue until it happens.  Honestly, this will be a goal every year.

I’m also hoping next year to have a chance to brew a commercial batch of beer, which would require either being selected for Collaborator, Willamette Week Pro-Am, or winning Best in Show for a competition that offers that as a prize.  A lofty goal, but one I hope I can achieve.

2019 Season starts in late January, so short turn around!