My wife and I just returned from spending Thanksgiving with family and friends out on the East coast.  It was my third trip back since moving out to Oregon.  The second trip didn’t warrant a write up here since we only visited one brewery on that trip, although it was a good one, Joymongers Brewing in Greensboro.

Raleigh, NC Area: We flew into RDU airport and spent the first couple of nights at my best friends place in Garner (just south of Raleigh).  The first night we ventured out to a local bottle shop, The Beerded Lady, to grab some beer for dinner.  We got some cans of It’s Fall Ya’ll Coffee Stout from Trophy Brewing (Raleigh) and a growler of Pirate Queen Double IPA by Bombshell Brewing (Holly Springs).  The next day we met my sister and her partner for lunch and then after lunch walked around the corner to Brewery Bhavana.  Combination brewery, dim sum restaurant and bookstore, this place seemed to be pretty pretentious at first glance, but the beer was solid and the staff was down to earth, so looks aren’t everything.  Tried their flagship Till Farmhouse Ale, Dig Chocolate Stout and Patrick’s Birthday Barleywine (whiskey barrel aged).  All were very delicious. 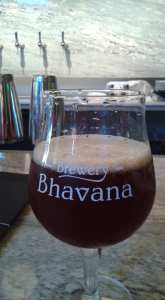 We finished the night at Brice’s Brewing  in Garner, just down the street from my friends house.  They had hosted a stout release party the night before and still had several on tap.  Between the four of us, we tried Oatmeal Stout, Chocolate Stout, Irish Stout and I also tried the Belgian Tripel.  The next morning we hit the road for South Carolina.

Pawley’s Island, SC: We didn’t make it to any breweries in SC, but we found some local beers at restaurants and at the grocery store.  The first night at dinner I had a great IPA, HopArt from Coast Brewing (North Charleston) which paired remarkably well with Southern style fried seafood. At the grocery store we picked up a 6 pack of Mango IPA from Palmetto Brewing (Charleston) and a 6 pack of Westbrook One Claw (Mt Pleasant).  The Mango IPA was quite good, the One Claw sadly was a little past it’s prime. I’ve had it before when it was better.  The second night I had an Espresso Porter also from Palmetto Brewing at a really great BBQ joint.

Asheville, NC: I hadn’t been to Asheville since I was young, and seemingly as soon as I left NC it blew up into a craft beer mecca.  We spent the next two days exploring Asheville, including a nice drive on the Blue Ridge Parkway.  The first night we stopped at Burial Beer Co. after dinner, which was a small place but they had a lot of unique beers.  I tried their blended sour and double IPA, which were both great and very different, and my wife had the coconut brown ale aged on cocoa nibs which was super chocolaty.  The next morning we had a tour scheduled at New Belgium Brewing.  We visited their Fort Collins brewery on our Denver trip two years ago and now got to see the East coast location.  The tour was great, it was cool to see the brewery and our guide was really great.  They gave us samples of Fat Tire, which I forget how good it is when it’s fresh, and Fat Tire White Ale, La Folie sour ale which is phenomenal, and Abbey (Belgian Dubbel) which was actually the first beer they ever made, and then their HPA Hemperor IPA which is made with hemp seeds.  Let’s just say when he started pouring it smelled like someone was lighting it up. 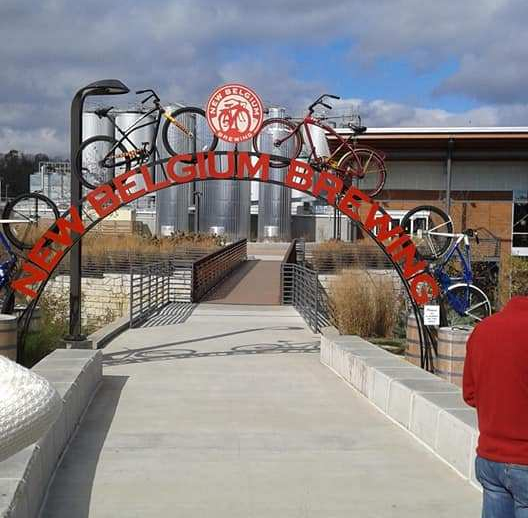 Several people on the tour recommended we go to Sierra Nevada Brewery if we hadn’t already been.  Another West coast brewery that has started an East coast outpost, Sierra Nevada was located in nearby Mills River.  Originally, I wasn’t sure if we’d be able to make it out there, but it wasn’t as far away as I thought, just a quick 20 minute drive away.  We had dinner at the brewery (highly recommend the Duck Fat fries) and then did the self-guided walking tour.  I haven’t been to the Chico, CA location, but the Mills River brewery is massive but also beautifully laid out.  The long driveway with landscaping and custom street signs made it feel like you were entering a Disney property. While we were there, I had this years Celebration fresh hop IPA, which was really good, and my wife had the Sidecar Orange IPA which was also very refreshing. 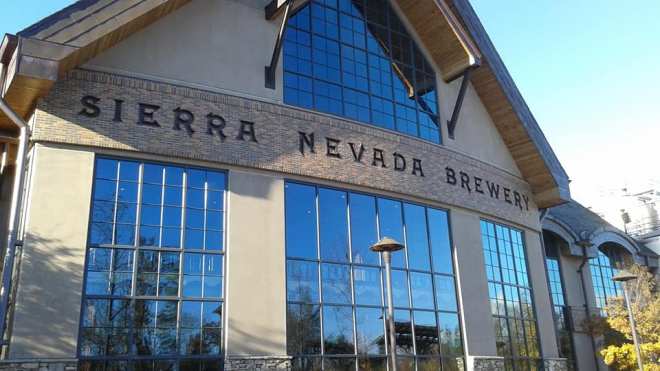 By this point we were actually starting to get kinda beer’d out.  After checking out some local art studios, we finished the Asheville tour with a trip to Urban Orchard Cider Co. It was nice to have something different, and the ciders were very refreshing.  We tried a hopped cider, a ginger cider and a holiday cider with cranberries that were all delicious. 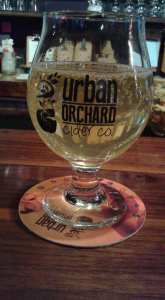 Raleigh-Durham International Airport: The last two days of the trip involved hanging out with my family and no beer, which is OK.  My parents don’t drink hardly at all and we’ve never had alcohol at any of the big family dinners, which is probably for the best.  However, we managed to snag a couple more local beers in the airport as we were headed home.  I had the Hoppy-Ki-Yay IPA by Lonerider Beer (Raleigh), and my wife had the Spoaty Oaty Pale Ale by Appalachian Mountain Brewing (Boone, NC).  Interestingly, I didn’t know at the time but as I just looked up AMB, they are part of Craft Brew Alliance which is based here in Portland. 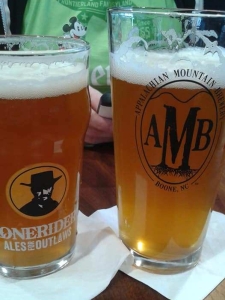 So there we have it, another fun trip to the East coast and five new locations to add to the Breweries Visited list.  All told, added another 31 unique beers to Untappd (plus a couple repeats).  Until next time, Cheers!